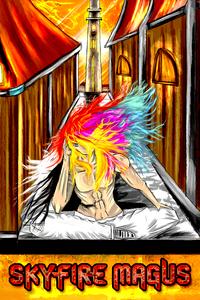 Lynne Hyorn, seventeen years old laziness-personified, manages to enter one of the four prestigious Academies for the Arts of Magic, Skyfire Academy for Magical Arts. However, unlike others, the reason he enrolled was not to pursue Magic, but rather because his father promised him hefty allowance if he manages to enter. His temporary tranquility soon comes to an end, though, as his father is drafted for war and his home is confiscated shortly after, leaving him to sleep on the streets. With no other choice, he decides to finally dedicate himself for the first time in his life, rising up from being just a lowly, Unranked Mage, to the ultimate guardian of the Academy: Skyfire Magus.

A coming-of-age story set in a world of Magic follows young Lynne through the perils of strength, dedication, and world where fist isn't always the answer to every question.