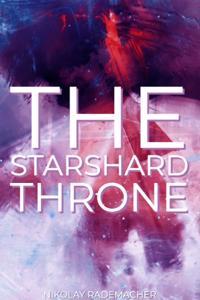 Traumatized, eleven-year-old orphan Rayne lives for her feeble twin brother, Niel. The two scrape for survival in Queen's Fall, the capital of the queendom of Argond. One odd job pits them against a plague of mysterious spirits, rising from the ground at night, killing. Skillful and daring, Rayne snatches a precious artifact from them. The encounter leaves her changed, imbued with the spirits' power. It shortly propels Niel and her to the court of the Starshard Throne itself. Her love for her brother driving her, she sets out to make a life for them within its deep webs of intrigue, mystery, and tragedy.
Sixteen-year-old Kira, Argond's wayward princess, wins the realm's prestigious battle arena tournament, and wins the disgruntled people's hearts. Once unmasked, her mother, Argond's enigmatic, tyrannical queen, punishes her in the most brutal way imaginable. Crushed and imprisoned, she accepts a mysterious stranger's dark power to free herself. It sets her on a journey of bloody vengeance against her mother, toward finding her true self, to seize the Starshard Throne for her people.
As Rayne and Kira pursue their intertwining fates, an unseen menace rises to the west. On the dark isles of Zaramor, the Empire prepares for invasion. The ruling warlocks have recruited the noble dragonknights, remnant of Zaramor's bright past. Materializing ancient dragon souls bound to their own, they are supreme magical warriors, a millennia-old family divided, and the last of their kind.
Before Zaramor's crystal dragons descend, can the orphans and rebel princess finish their destinies? Can they master their sprawling mazes of friendship, love, loss, and family? Can they, before it is too late, find that, in the world around the enigmatic Starshard Throne, nothing is as it seems?