A Conquest of the Stars: The Heart's Anguish 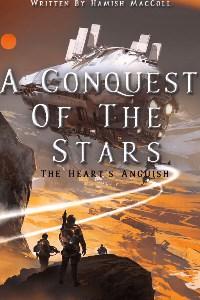 Stolen from his home, Eleusis is forced to wage a war against his brother. He now serves the ones who killed his father and stole him away. Eleusis uses his genius to annihilate his foes in battle, while secretly working to bring the Universal Collective of Allied Planets and Systems to its knees. Filled with determination to create a better universe, Eleusis is forced to do terrible things in the hope for a better tomorrow.

Having risen to power as the Champion of Her Majesty, Kaldratos must unify a divided Imperium and save his Empress from the foes surrounding her. Faced with debauchery, assassinations, duels and plots, he must bring stability to a splintering Empire, or forever be remembered as the one who lost everything.

Narrowly escaping the destruction of her home; Risa finds herself entangled in the plots of the Imperium as her saviours fight to destroy it from within. Caught between her fear of death and her loyalty to the ones who saved her, she must find her own path amidst a web of deceit and betrayal.