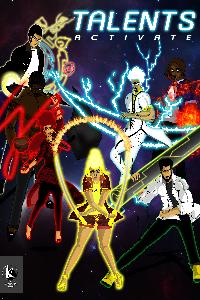 Once the earth was invaded by certain beings with supernatural abilities threatening the existence of mankind. The reason for this invasion was unknown, so the beings responsible were called the Unknowns. Some humans wielding abilities and bearing symbols similar to what you call mythological deities, rose up to oppose the Unknowns.
Those with abilities bearing an insignia were called the Crests while those with only abilities and no insignia were called the Advanced Talents (Ats). However, as time went on, some Crests changed and sought to rule as gods over the ordinary humans while some Advanced Talents sought to even destroy the ordinary humans.
In the midst of all this, a young man, ID, an Advanced Talent and a lady, Ifunanya, a Crest, along with their friends seek to protect those they can from the chaotic power of the Unknowns, the villainous Crests and the villainous Advanced Talents.