To This Kingdom Come 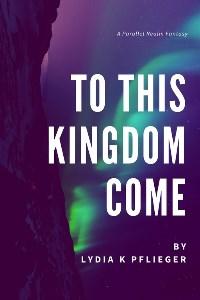 The Realm: a parallel universe with 13 Kingdoms that only a select few from Earth can enter in their sleep. Marylea is one of those select few. When Marylea wakes up on her eighteenth birthday into a strange medieval-esque world where she can Shape things at will, she thinks it's pretty cool. That is, until people start disappearing.

Ashling is the unpopular princess of the Kingdom of Aragonia, one of the 13 Kingdoms of the Realm. Doomed to marry a prince or a chancellor, and not the boy she's loved since she was a child, she is ready to accept her fate (or is she?)

When Ashling's beloved Kingdom is in peril, she must team up with Marylea to find a way to stop their looming end. The burning question is: is it too late?

A story of adventure, friendship and star-crossed lovers, To This Kingdom Come is a COMPLETE young adult fantasy novel that will thrill and enthral.