Destroy your new life, repair it, destroy it again by doing crazy things while screaming YOLO! 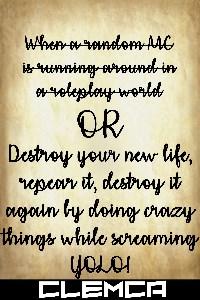 There is a world divided between two gigantic powers: the Empire, and Nyggloth. The first have a control over an entire continent of tens of thousands of kilometers wide, the second, is a 3,000 km wide island!

The Empire is full of gods, heroes and powerful mages.

The only reason the Nyggloth is able to resist to the Empire is because of one man: Merlin.

100 years ago, an unknow continent, Khan, until now hidden, was revealed to the world. It was like the population of the continent disappeared... On it, entire cities, skyscrapers, and futurist buildings... And Merlin. Merlin was not only the only one who knows technology and how to use it, but also was extremely powerful in magic. Having no choice, Nyggloth accepted an aggreement that stated that if Merlin protect Nyggloth, then half of the power will be ceded to him. After ten years of battle, Nyggloth unexpectedly won the war...

Today after 90 years of peace, nothing happens between Nyggloth and the Empire... Until..