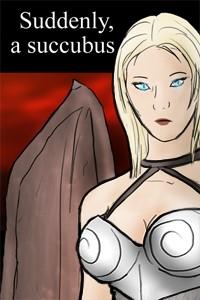 The protagonist is a personality like an iceberg: introspective, asocial and completely uninterested in the world and its people beyond necessity. Approaching ships beware! A succubus, on the other hand, lives for desire and interaction, playing mortal hearts like a fiddle. These clearly mix like oil and water, so what do you get when you combine them? This is a story of that kind of emulsion.

This novel is bit of an experiment for me. I haven't written fiction before, for one. I also chose a character context that I normally wouldn't, and let the characters drive the story, especially in the beginning. Overall the main focus will be the main character's own story rather than the events of the world. The setting itself uses many familiar fantasy elements, though I plan to add my own twists.
Note that I'm not really planning to write any steamy scenes, despite the said character context being literal demons of lust and all. There are of course jokes and scenes that skirt around the subject, but this is not a romance story of any kind.
So, is it a mess? Probably. But I hope it's an entertaining one at that.