Regarding The Life of A Certain Fallen Noble 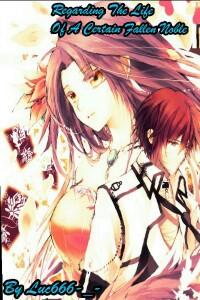 ...Every paths leads to the same destination...
Five Saints. Five Mage Kings gone mad. Five worlds on the brink of destruction. An entire plane in agony.
Seven Sins. Countless factions at war. An endless cycle that has to be broken.
...Chaos must reign...
In days long past, several Mage Kings cut a path of destruction everywhere they went. Cruel experimentation, the creation of monstrous creatures, the tearing apart of families and mass genocide...There were few sins the mad Mage Kings didn't commit.
As the Five Saints were summoned in desperation by the races of the world, everything was already at it's darkest hour.
When the fighting was over, when the Mage Kings were gone and the Five Saints had returned to their planet of origin, a World Council was erected to keep the the delicate balance from falling apart.
Many eras pass.
Lyle Greyborne. Current heir to the powerful Greyborne family, the only son of Adarian and Alyssa Greyborne.
With the maroon hair of his Greyborne ancestory and the exceedingly rare golden eyes of his mother's Bathory clan, Lyle's talents can only be described as terrifying. These, along with his personal status, make him desired by many.
After a young Lyle begins a relationship with one Sophia Alderton, two years pass by. After a lack of trust coupled with a certain misunderstanding they leave things on a sour note. But Lyle even still retains his friendship with Cecelia, Sophia's sister.
With Cecelia, his loving sister Iris and Melanie--A young woman who recieved his aid some time ago--Lyle is content to pass the days in peace and idleness. Well, when he's not completing harsh missions from his combat instructor, that is.
But this peace is ruined when Lyle's father tells of a mysterious group hell-bent on causing war between the human and demon continents.
Later, when his father involves him and his sister in an incident resulting in Iris being put in mortal danger, Lyle makes a decision which could very well cost him not his life... but instead his soul.
The forces of this world and others will work against him. His status, his loved ones, his dignity as a human being... All these may soon be lost.
His life isn't his own. Not anymore. He can only brace himself for the things to come and hope he makes it out with his sanity intact.

EDIT-
Author Note: Another thing, the cover photo is not mine. Obviously. It's just a picture I found one day at DeviantArt and thought that the two shown in the picture looked like how I imagined Lyle and another character to be. Simply put, it was convenient in various way and I also loved the art.
From my understanding is is from a collaboration between artists Chocobikies and Pinlin. Here is a link to where I found the original
http://pinlin.deviantart.com/art/Linked-456655669